Okay, so I know this technically isn’t considered a midi hem length, but for a tall girl like yours truly whose hemline comfort zone is a little longer than mid-thigh, it totally is. And I have been absolutely loving it lately. The midi trend is just so charming in an old-fashioned kind of way. It makes me want to plan a fancy, elaborate British tea party for my friends – saucers, midi dresses, and all.

I think this love affair with the midi length started with my recent discovery of Doctor Who. After hearing my friends (both in real life and in cyber space on pinterest/twitter) rave about the show, I decided to give it a try (aka binge watch two seasons in one night on Netflix. No judging). They were totally right, too. This show is worth all the hype it receives. If you like a well-written, well-acted mix of light-hearted humor and seriousness capable of kicking you in the feels, along with monsters and aliens from all across the universe, time traveling, and some nerdy girl eye candy (David Tennant *le sigh*), then you will definitely adore this show. While I am not that far into the series (I’m about halfway through the third season), I can say that so far my favorite companion of The Doctor is Rose Tyler, the catalyst behind my midi obsession. In the season two episode “The Idiot’s Lantern,” Rose and The Doctor travel back in time to London in 1953. Obviously a lot is different between London 2006 and London 1953, but one of the major (and most obvious) changes is the fashion. So, Rose sports this little number to blend in with the times. While the full pink skirt, complete with tulle and matching kitten heels, isn’t exactly 2014 appropriate, the concept’s demure whimsy was enough to spark my interest. 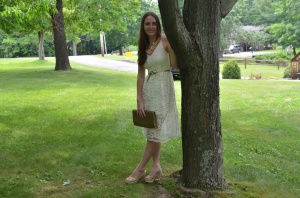 Naturally, I kept my eyes peeled at my local H&M, where I also work, for anything that would satisfy my craving for a midi. As usual, the bargain-but-quality mecca did not disappoint. I actually tried on this dress along with another basic cotton pink midi skirt that sort of channeled the feeling of Rose’s, only much more 21st century. I ended up passing on the skirt because it was a little too big in the waist (and let’s be honest, how much wear can you really get out of a bubblegum pink midi skirt when you live in suburban Pittsburgh). But with this dress, it was love at first sight. It’s an ivory lace dress that hits me right at the knees (and while a traditional midi hits more mid-calf, hence the name, I personally still consider this one). The V-neck is very flattering, and it dips down the same way in the back. The dress has a hidden zipper up the side, which makes getting in and out of it a breeze. I always love a dress that appreciates beauty as well as functionality. The lace itself is gorgeous, with little intricate floral/leaf designs all through it. The dress has a slip underneath that stops around mid-thigh, which allows for that beautiful lace to be shown off even more against the skin. The hemline itself is scalloped, which is a thoughtful touch that makes this dress even more special. The best part? This was only $19.95. Crazy! You can find it here.

While this dress is beautiful, it can be a bit plain on its own. Plus, who doesn’t love accessorizing? I chose to dress it up by adding a floral necklace from Forever21 (no longer available, but similar ones can be found at J. Crew as well as ebay here), a gold glitter belt from American Eagle (don’t ask me how I tied that because it kind of just happened), and a gold woven clutch from H&M (similar one here. Also my nail polish is “Caribbean Temptation” by China Glaze, in case anyone was wondering). However, with a cute straw fedora, a denim jacket, and some strappy sandals, this dress could easily be played down for a fun day shopping or a picnic at the park.

I finished the look off with a pair of wedges that I have had for years from G.H. Bass & Co. Their shoes are a little on the pricier side, but they last and are so comfortable. I feel like I could run a marathon in these (not that I would actually ever do that. I avoid running like little children avoid naptime and vaccines).

Also, a huge shout-out to my beautiful sista for helping me out by taking these photos. You rock, girl!

Are there any trends that you have been loving lately (both TV induced as well as non)? Let me know!

2 thoughts on “A Midi Moment”

It almost feels like a vacation
I’m sorry @julianrouth, but I’ve met someone else. The Chloe mini c bag and I are going to be VERY happy together 🌸🐴💕
Playing dress up for when this is all over 🌸🌼🌸🌼🌸
What a beautiful day!! ☀️☀️☀️
Maybe this penguin will come put an addition onto our tiny apartment so @julianrouth and I won’t completely lose our minds by the end of this quarantine 🐧🔨😂
HAPPY BIRTHDAY DAISY!!! 🐾🐾🎊🎊🎊 9 years and still the best dog ever ❤️❤️❤️